Image processing is the manipulation of images to produce new images or info about said images. Here I will quickly go over the fundamentals needed to develop a process to recognize Sudoku puzzles (then we’ll be only a skip away from general object recognition and ultimately the robot apocalypse, good times).

When you look at a typical colored image on your computer screen, it’s generally made up of thousands or millions of dots using various mixtures of red, green, and blue light. Each of these colors represent a channel in an image. Images can be made up of other channels like alpha, used for compositing, but that’s not needed here. A collection of these channels representing a point in an image is called a pixel.

Each color in each channel is made up of so many bits. Most computer images use 8-bits in an unsigned format for `2^8 = 256` different values or shades. Where higher values are usually defined to appear brighter or have a greater intensity. Increasing the number of bits makes the apparent change between different shades of a color smoother. There are also other formats like floats which are clamped to between 0.0 (none) and 1.0 (full intensity) before being displayed. 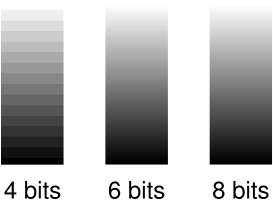 Images are usually laid out in memory as large continuous blocks. The dimensions used to describe these blocks (think width and height) determines if an image is 1D, 2D (most common and the only type used here), 3D, or something else entirely. The channels can be interleaved (RGBRGBRGBRGB…) or in continuous chunks (RRR…GGG…BBB…). The beginning is usually the top left of the image and successive elements are found in a left-to-right and then top-to-bottom order. Although, some libraries and image storage formats expect the rows in a reversed bottom-to-top order. Accessing a particular pixel’s color channel using an X and Y coordinate is done using a straight forward formula1.

There are other ways to represent color than just mixing shades of red, green, and blue (RGB) light. For example, painters mix cyan, magenta, and yellow (CMY) together to form other colors. Another method is to refer to a color by its hue, saturation, and lightness (HSL). These are all examples of color models. Some color models, such as RGB and HSL, allow colors to be converted between one another at a cost of computational precision. In other cases, colors cannot be directly converted, like RGB and CMY, so a much more complicated transform is necessary to match colors that appear similar.

Color spaces describe how a specific color should be perceived. They’re usually defined as a range of colors relative to what can be perceived by humans. Supporting all visible colors doesn’t always make sense. For example, your computer screen cannot display many shades of green that you have no problem seeing (unless you have a vision disability like being color blind). The important take away for color spaces is that if you have an 8-bit RGB value (eg. (255,128,23)) in one color space and the same RGB value in another color space, they don’t necessarily represent the same perceived color.

The industry has standardized around the idea that for any RGB image where a color space is not provided, it’s assumed to use the sRGB color space. Since this project is expected to work with any random camera, this is also the color space assumed for RGB images here. Finding the actual color space of a camera requires a calibration process that is outside the scope of this post.

Most of our image processing operations are based on one of two patterns. The first modifies each each pixel independently. Usually in sequential order, for simplicity and cache-efficiency, but order doesn’t really matter. For example, the following copies the red channel value to the green and blue channels to create a type of greyscale image.

You might be wondering: what should be done when the surrounding pixels don’t exist because they are outside the boundary of the image? It completely depends on the operation being performed and how the result is going to be used. Sometimes the edges are not important so the pixels are just skipped. Other times, a clamping behavior is performed so the closest valid pixels are used. There are also algorithms that adapt by changing their behavior such as accessing less pixels and using different kernels.

Here is an example where the edges are ignored and the kernel computes an average to produce a blurred version of the original image.

Notice in this example that there are separate input and output images. Because convolutions require the original pixels, modifying the original image in place would produce a completely different and incorrect result.

A good choice because it’s easy to implement and makes use of red, green, and blue channels is Y′ (luma) from the YUV color model. Following the BT.601 specification, Y′ can be found using the following formula.

The code is very similar to the previous greyscale example. Simply iterate over each pixel individually, calculate Y′, and assign the resulting value to the red, green, and blue channels.

You might have noticed that a lot of memory is wasted by having all three channels with the same value. This is definitely something to consider when memory is short or you’re trying to increase performance. Keeping images in an RGB format, even when appearing greyscale, tends to make debugging easier because no extra processing is required to display them. Regardless, I’ll make it clear what type of images are being used, whether it’s RGB, greyscale, or something else entirely.

This is just a taste of image processing. If you want to learn more, check out the resources below. Armed with the basics, it’s time to acquire some images to work with. Next up is capturing video frames from a camera.